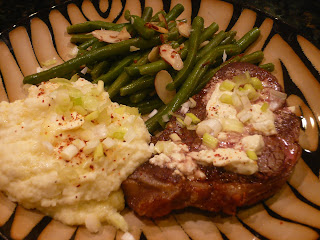 Last night my daughters went to a sleepover so that meant that my husband and I got a date night! In keeping with our current diet, we did it up right with a low carb steak dinner. The menu was simple but satisfying:

Perfectly cooked Fillet Mignon topped with Boursin Cheese
George Stella's "Mock" Garlic Mashed Potatoes
Green Beans Almondine
To cook the filets, I heated a cast iron skillet in the oven to 500. I seasoned the steaks with kosher salt. When the oven was fully preheated I put the skillet on a burner turned up to high and seared the steaks for 30 seconds and then flipped them and put the in the oven for about 5-6 minutes after which I flipped them again and continued cooking them for 5-6 minutes to medium. When done, I transferred them to a plate and topped them with store bought boursin cheese spread. I covered them and let them rest for a full 5 minutes before serving.
The Mock Mashed Potatoes are made with cauliflower and George Stella has really nailed it. I made them exactly as the recipe appears here:
http://www.foodnetwork.com/recipes/george-stella/mock-garlic-mashed-potatoes-recipe/index.html

I steamed the cauliflower rather than boiled it. When it was done, I removed the steamer basket and let the cauliflower dry that way rather than having to squeeze between paper towels. While the cauliflower cooked, I put the remaining ingredients in the bowl of the food processor so it was ready to go. I also made them before starting on the rest of dinner and right as were were about to eat, I zapped them in the microwave for 2 minutes, stirred them up, and topped them with butter. I found that doing this improves the texture. I did not have chives but I did have scallions so that is what I garnished the dish with. As you can see the meal looks beautiful and we are feeling well fed!
Posted by Unknown at Sunday, August 29, 2010