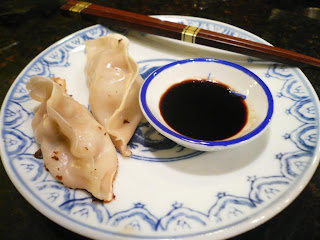 Beat the remaining egg and brush some around each wonton wrapper. Place a heaping teaspoon of filling in each wrapper. Fold over into a half moon and pleat it as you seal it shut. Grease a large non stick skillet with shortening. Place the put stickers in the skillet in a single layer. add 1 cup of water to the pan. Cover tightly and bring to a boil. Turn to low and let simmer until the water is evaporated. Continue to cook in the dry pan until the bottoms brown. Serve with this dipping sauce:
Mix 1/4 cup soy sauce with a teaspoon of sesame oil, a teaspoon of sugar and a tablespoon of rice vinegar. Stir well and serve with the potstickers.
Posted by Unknown at Saturday, February 19, 2011 2 comments: