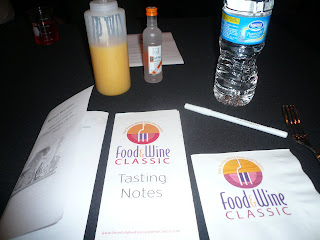 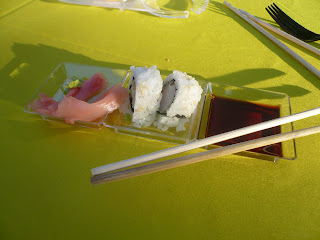 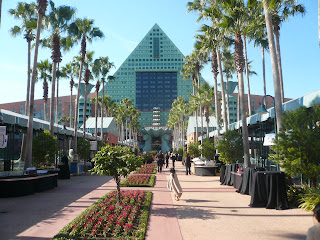 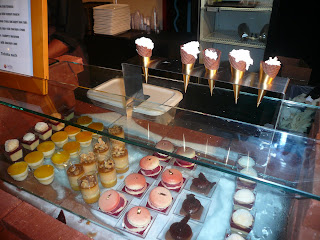 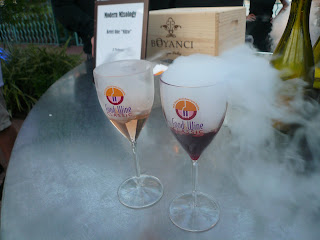 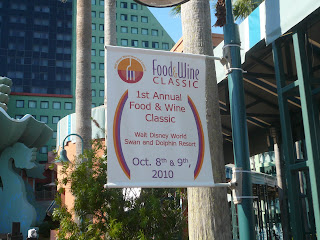 What a weekend I have just had! This year the Swan and Dolphin Resort held their first Food & Wine Classic to coincide with Disney's Epcot Food and Wine Festival. When I saw the advertisement for the event in the paper I told my husband we just had to go. They offered a couple of different options including an a la carte ticket option where you purchased tickets for samples or you could purchase a wristband for $50 which then got you unlimited samples plus one of 6 seminars or, and this was the best deal yet, for $169 you got the seminar and wristband for 2 AND a room for the night. So I booked it. I thought the whole thing was extremely well executed.
Apparently other people read the same paper I do and think the same as I do because by the time I called to book our night our first two seminar choices were full. Those were the wine blending seminar and the one titled "Beer Please." So we settled for Modern Mixology. Well you know, I am glad the others were full because we learned some really cool stuff in our seminar.
Our evening began at 4:30 when we attended the seminar. It was conducted by Doug Draper, bluezoo's General Manager and Lindsay Skillman, Cabana Bar and Beach Club's Manager. They did a fantastic job. In the seminar they went over different techniques they use to create memorable cocktails at their restaurants. The first thing we learned was how to make the bluezoo's Zooberry Cocktail. Then they brought around a sample for everyone. YUM! Then they showed us how to use different chemical reactions to create some WOW factor for cocktails. They used agar agar to make these cherry flavored balls out of grenadine and they used sodium alginate and calcium chloride to produce these little balls of flavor that will burst in your mouth when added to a cocktail. They illustrated it with orange juice. We squeezed the mixture of OJ, calcium chloride and sodium alginate into a bowl of water to form little balls. These were strained and added to a mimosa cocktail. Most of the stuff they showed us can be reproduced at home so watch for a future post where I experiment with some of these techniques. The one technique that we learned about but will not be happening at home was the use of liquid nitrogen. Very cool but not home friendly. We did get to sample cocktails and food featuring all the techniques we learned about.
The seminar lasted one hour. As we left we each got a tray that had a wine glass holder and of course a wine glass and we headed out to the causeway between the Swan and Dolphin to begin the rest of the evening. The Food and Wine sampling went from 5:30 to 9:30. They had a live band. They featured food from all of the restaurants in the Swan and Dolphin so let me start there. The Cabana offered a crab meat and watermelon concoction that I did not think I would like but did . The Fountain offered falafel with a really yummy dipping sauce. Next was Kimono's serving sushi which was delicious. The best was Shula's. They had filet mignon and creamed spinach. We stood on line for that one 3 times! The Il Mulino New York Trattoria had the most amazing pasta bolognese and Todd Engish's bluezoo offered these buffalo chicken bites with blue cheese dressing. Finally, there was a booth of desserts by Executive Pastry Chef Laurent Branlard.

Now onto the wine ... and more! There were 6 wine stations. The first featured Valley of the Moon from Sonoma Valley. I had the unoaked chardonnay. It was delicious. Next were wines of Washington featuring Ste. Michele. I stuck with white and it was very nice. Then there was Malbec of Mendoza featuring wines from South America. They were wonderful. We moved on to the Vino of Veneto with wines from Italy and a Taste of New Zealand and Down Under featuring wines from both of those regions. I tried them all and they were all wonderful.

My favorite station was the Base to Bubbles. Champagne was served there and I love good champagne. I visited them several times! We also sampled sake at Ty Ku Fusion. We sampled several different beers at the Beer Please! station and we tried 2 kinds of cocktails at the cocktail competition between Swan and Dolphin bartenders. My favorite was the Sangria being served at the Modern Mixology booth. After putting the sangria in your glass they topped it off with fruit freeze dried in liquid nitrogen. It made the drink steam the fruit was crunchy and delicious. Check out the picture! Loved it! They also featured white russians served frozen in little balls using liquid nitrogen.
The whole thing went above and beyond my expectations. The fact that they brought all the different techniques and learning's from the seminars out into the tasting area was really great. Also, now that we have sampled a taste of these restaurants we will definitely be returning for the full blown meal! The restaurants stand on their own and should be enjoyed as an evening out and not just as a hotel guest.
In conclusion, this was a fantastic event which we will come back to. I am glad we had a room for the night afterwards!