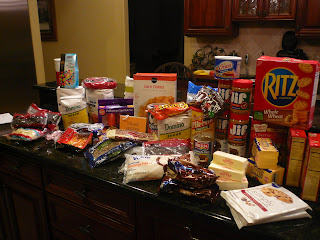 Ok, I have been seriously busy! My daughters are in Brownies. Their leader has a Brownie troop and a Junior troop with 24 girls total between the two troops. As part of one of their badges they each submitted their favorite cookie recipe and made up little cookbooks with all the recipes in it. At the next meeting we decided they should have an opportunity to try all the cookies. This is where I come in. I have a rather large kitchen so I volunteered to host this meeting. I also volunteered to make all the recipes! Well, their leader did make the 2 recipes submitted by her girls. I saved 4 of the recipes for them to make at the meeting. Each meeting is one hour so I had to make sure the recipes I saved were doable in that amount of time. The other 18 recipes had to be done in advance. The meeting was on Monday, 9/13 at 3:30. My family and I spent the weekend at Disney and did not get home until late Sunday evening so I did not get started baking until 9 pm on Sunday.

I baked the hardest ones on Sunday night and was up until 3 am. The next morning I started in again at 8:30 after getting the girls off to school. I finished the last batch at 2:30 and had an hour to prepare for the kids to arrive at 3:30. There were a TON of cookies! I am going to post the favorites here. I have pictures of most but I did not take pictures of the buckeyes because I did not think I would be posting that recipe. That was one of the ones I made on Sunday night and it was the most time consuming. It had me questioning my sanity. The dough is very crumbly and does not look like it will come together. I panicked and hit the Internet to check out other recipes to see if I had done everything right! Then, it made like 100! And, each one has to be dipped in chocolate! I would have been in bed by 1:30 had it not been for that recipe! However, it did taste really good. I got a lot of comments on them. So, I will post the exact recipe here. If you make them I would 1/2 the recipe. But they are really good. So, that said let's get started:
Posted by Unknown at Wednesday, September 22, 2010